May Day was associated with the beginning of cutting the turf in the upland bogs, we have sourced a photograph held by the National Gallery of Ireland of turf cutting on Annaverna (the uplands of Omeath) from the 1940’s and are delighted to share with you the story of our own upland bog and practice of turf cutting by a local historian, Mr Seamus Murphy. The turf road from Ardaghy to Clermont mountain was constructed in a few short months in 1941 when Ireland faced a serious fuel crisis.

Louth County Council set up its Fuel Committee in March 1941 and commissioned the County Surveyor to take a look at the fuel potential of the area around Clermont Cairn. It could be approached from Annaverna, from Edentubber or from Ardaghy in Omeath, but there were no roads or even useful tracks. He decided that a road from Annaverna was impossible, from Edentubber impractical and the most promising route was up from Omeath. And so the turf cutting began in Omeath and privately owned plots were still being cut into the 1970’s. 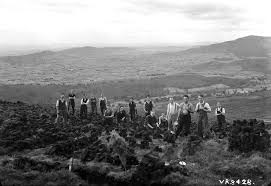