The Ten Townlands of Omeath

The village of Omeath is divided into ten town lands, these being Ardaghy, Ballinteskin, Ballynoonan, Bavan, Cornamucklagh, Corrakit, Drumullagh, Knocknagoran, Lislea and Tullagh all rich in antiquities and places of interest.
In Ardaghy (The High Field) you will find the homestead of the famous blind poet Seamus MacCuarta and from its turf bog road that takes you to the “Cadgers Pad” (The Cadger’s Pad was the route by which herring from Omeath were brought to market in Dundalk in times gone by) you can look down on the once forbidden “Poill a Bhui Mass Rock” that exists from the penal times when priests under the penalty of death had to say their daily mass from this rock in the open air.
The town land of Ballinteskin (Town of the Quagmire) with it’s majestic “Ess Mor” waterfall whose currant once powered the old corn mill was where the of “Buchaill Breagach Peak Scarecrow” hid. And students from the Irish College (Colaiste Bhride) studied the native dialect of Omeath in the now derelict youth hostel from 1919 until the collage closed and moved to Ranafast Co Donegal in 1926
Ballynoonan (O’Doonan’s Town) lies next to the Commons of Carlingford with its “Greers Quay” protruding into the Carlingford Lough forming shelter from the elements of the Lough. In the summer months the Jarvey’s transport pilgrims to pray at St Jude’s (the patron saint of hopeless cases) shrine at Calvary and next to the shrine is the tomb and resting place of the founder of the Rosminian holy order, Fr Father Luigi Gentili.
The fields of Bavan (The cattle Enclosure) hosted the first recoded Gaelic football match in 1750 as recorded by Niall Óg Mac Murchaidh in his famous poem “The match of Bavan Meadow, Omeath”
Cornamucklagh (The Swine Heard’s Hill) is the most northerly town land of Omeath, at it’s highest point “Flagstaff View” a vantage point to admire Carlingford Lough, the Mountains of Mourne and the Newry Canal as it meanders into Newry past Victoria Lock and at it’s lowest point Narrow Water that is to be soon the catalyst of cross border partnership, linking Warrenpoint and the Mourns in Northern Ireland to Omeath and the Cooley Peninsula by the building of the Narrow Water Bridge.
Corrakit (The Cat’s Rock) is where you will find “The hiding place of Ireland” or locally referred to as the “Windy Gap” and nestled in the shelter of the hiding place is the grave of the “Long Woman”. On one side of the Long Woman’s Grave lies “The Bog of Aennagh” with an array of unusual types of flora and fauna that is usually found on top of mountains, yet here it is found in the characteristics of a low lying bog and on the other side of the Long Woman’s Grave lies the “Rock of Rushing Water” a small waterfall cutting into the black stone of the mountain.
The town land of Drumullagh encompasses a wealth of built heritage with its mystical round tower in the shadows of Narrow Water Castle, St Andrews Church and School built in 1838 and the famous Park Hotel with its folly that played its part in the shaping of Irish history and it also hosted the first Irish College on the 22nd August 1912 until the college was transferred to the town land of Ballinteskin in 1919. And not forgetting Drummullagh was the location for the book, play and Hollywood Film “Paddy the Next Best Thing”
Knocknagoran (The Hill of the Goats) is at the heart of Omeath, where the history of Omeath is preserved from the coast guard cottages, the Strand Hotel built in 1840 to the old Great Northern Railway Line Station House that brought tourists and smugglers from Belfast in the 1930’s to the cross roads on Sunday’s to socialise and trade and not forgetting the pier in that reaches out and links Omeath to Warrenpoint since the 1880’s when currach’s ferried passengers across the Lough before the steam liners become obsolete and a summer schedule ferry still runs today.
Lislea (The Grey Fort) holds the secrets of the last Gaelic speakers of the area, their homesteads can still be visited and stories of the flight of the “Fadgies”(Fruit and Fish Peddlers) from Omeath to Belfast bringing with them the Gaelic tongue that can still be heard in Belfast.
Tullagh (A Hill) town land is a memorial to the hard times and poverty of yester year with its “Famine Bridge” built on the road referred to locally as the New Line, the excavation of the “Clermont Pass” a road cut out of the side of the mountain with voluntary labour during the Second World War from Tullagh to Clermont in an attempt to get access the turf fields . And is it any wonder that in Tullagh there is a field that shamrock never grows 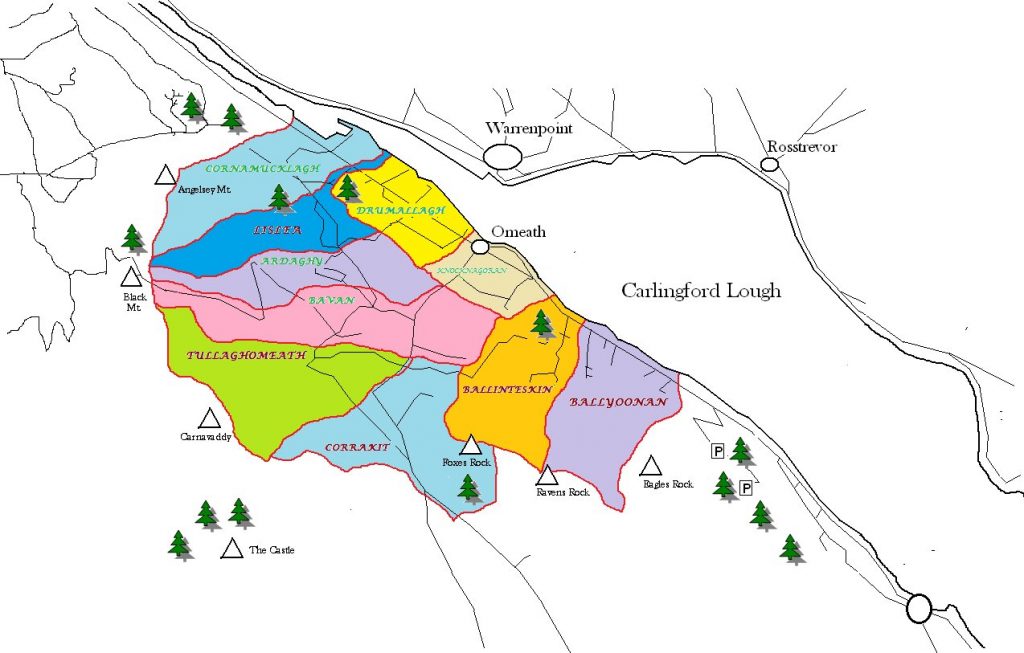