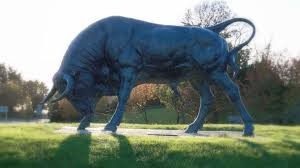 It is said that a years protection is given on those to whom it is recited;

That Those who hear The Tain shall be blessed with health;
And that those who do not sleep or converse during the telling, shall obtain their hearts desire.

Cúchulainn is most celebrated in his pivotal role in the epic Táin Bó Cuailnge (pronounced – Tawn Bow Coole-in-ya), the cattle raid of Cooley.  The Táin Bó Cuailnge, written more than 1,200 years ago, is Ireland’s greatest legend and one of Europe’s oldest epics.

In this saga Queen Maeve of Connacht and her husband Ailill decide one night to compare their possessions.  After much discussion, it becomes evident that Ailill owns a great white bull, Finnbennach, of which Maeve has no equal. There is only one bull in Ireland equal to Finbennach, the great brown bull of Cooley (Cooley is a peninsula in modern day Co. Louth).  Maeve decides she must have the Brown Bull… and so begins the story of the Táin.

Maeve and her armies set off from the Royal Palace at Rathcroghan, Co. Roscommon in pursuit of the Brown Bull. Maeve lines up a formidable army against Ulster and invokes a magic spell against the Ulstermen.  The only thing that stands in her way is Cuchulainn, the greatest of all Celtic heroes, who defends the Brown Bull and the lands of Ulster, as his fellow warriors lie asleep under the spell.  Since Cúchulainn is not a born Ulsterman he is unaffected by the spell.  Single-handedly our hero takes on Maeve’s army. Cute and cunning Maeve uses her wiles to make another great  warrior, Ferdia, jealous of Cúchulainn.  Against his better judgement Ferdia is lured into facing his friend and foster brother Cúchulainn.

For days they battle it out at Ardee (Ath Fherdia) and by night they assist and nurse each other. They pledge always to be brothers but eventually Cúchulainn kills Ferdia.  Maeve gets her brown bull but it is a short lived victory for she loses him soon after.  According to legend Cúchulainn, who was fatally wounded, tied himself to a standing stone at Knockbridge, so that he could stay upright and face the There once was a man named Conn O’Hanlon.  On his deathbed he told his sons, Conn and Lorcan, that they could have all his land.  Conn promised his father that he would take Lorcan to a height and tell him that as far as the eye could see was his.  Conn did this but he tricked Lorcan and brought him to a hollow part of the mountain.