History of the Currach

September 2017 at Greer’s Quay for the launch and sea trials of ‘Lassara of Narrowwater’, probably the first currach to be built on Carllingford Lough in a century and a half. It is the brainchild and creation of Neville McCann of Cornamucklagh, one-time picture framer, these days a maker of fine concert harps and now a master boat-builder as well. That’s him in the bow seat – we are learning the language of the sea. I was proud to help, mainly by sourcing long hazel rods in the Ferry Wood and around the Flagstaff. And I found him a 30-litre paint drum which he turned into a kettle to make steam for the steam box he made out of old plywood to soften and shape the bulwark timbers. Neville found an old canvas sail, got a tin of tar and went to work. No computer-aided design here, it all came out of his head based on a couple of photographs of the real thing. On the first sailing they found it needed ballast to stop it spinning, so they put rocks in the bottom but that is obviously not a a great idea in such a fragile craft. So I collected a few of my empty coal bags, half-filled them with sand and we laid them along the middle which went better. The boat is named after Lassara, who went to her death at the Narrowwater Keep in grief for her lost lover, the harper whose music can still sometimes be heard at twilight along the path by the wood opposite the Keep. 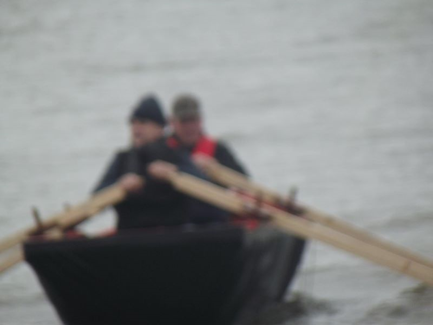