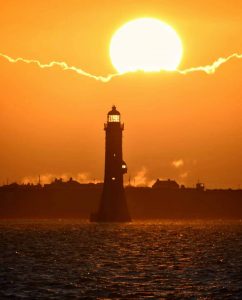 Haulbowline is a main sea light and also serves to guide vessels from seaward through the entrance channel into Carlingford Lough. It is built on a wave-washed rock, exposed only at low tide.

The lighthouse was built after a request was made in 1817 to the Corporation for Preserving and Improving the Port of Dublin (the Ballast Board) by the merchants of Newry to replace the 1803 Cranfield Point Lighthouse due to the latter’s poor position in marking the dangerous rocks at the entrance to Carlingford Lough and also its inadequacy for the guiding of vessels at the west end of the Lough. Cranfield Point lighthouse tower subsequently became a victim of coast erosion and tumbled onto what had become the foreshore in the early 1860s.

The cut stone tower of Haulbowline Lighthouse was designed by the Board’s Inspector of Works & Inspector of Lighthouses, George Halpin (senior), and was built under his direction by workmen of the Board. Its overall height is 34m and the main light is 32m above high water. Building this tower on a semi-submerged rock with fast currents running around it was a remarkable achievement at the time. The tower was painted white and remained so until 1946 when it was changed to its natural stone colour.

A fixed white light was exhibited on 1 September 1824, and a half tide light was also exhibited from a small lantern approximately half way up the tower on the seaward side. During daytime a large ball was hoisted on a mast above the lantern to indicate the tide.

A bell was struck by a machine every half minute during foggy weather. On 1 September 1898 the fog bell was changed to an explosive fog signal giving one report every ten minutes. A red turning light and a white standby light in case of failure of either of the two Carlingford Leading Lights (Green Island and Vidal Bank) was established along with the Leading Lights on 28 February 1873. They were shown from lower windows of the tower. The tide light at night and hoisted tide ball during day time was discontinued in November 1922.

From 1824 until 1922 the Keepers and their families lived in the Cranfield Point Lighthouse dwelling. New dwellings were built at Greencastle in 1922 and subsequently sold after the light was automated.

The explosive fog signal was changed to a diaphone fog signal sounding once every five minutes in 1932.

The light was converted to electric and made unwatched automatic on 17 March 1965, with a different light apparatus but an almost identical character. It had the distinction of being the first Irish major offshore lighthouse to be made completely automatic and remotely monitored and controlled from the shore. The light source was an electric Pharos PRB45 Mk II light. The white standby light was discontinued. A pneumatic Supertyphon fog signal with a character of one blast every 30 seconds replaced the diaphone signal. An emergency light with a character of Fl 3 every 10 second was established in August 1965.

A Datafonic monitoring system sent ashore pre-recorded voice messages by telephone about the status of the light and equipment.

Since 1978 the light at Haulbowline has been exhibited in poor visibility whilst the fog signal is sounding.

The unwatched station was placed under the care of an Attendant who lived at Greencastle, Co. Down.

In 1990 the lighthouse was completely re-equipped. The optic was replaced by an AGA PRB21. The Supertyphon fog signal was replaced by an electric horn with two emitters. The two existing diesel generators (which had replaced the original ones in 1979) were retained and a third generator was installed. New control systems and battery systems were provided and the monitoring system was replaced by a new computerised Datac Remote Control and Monitoring System.

Unfortunately, the PRB21 optic did not perform to specification, the sealed beam lamps repeatedly failing prematurely. The solution decided on was to replace the PRB 21 with two new PRB 46 MK II optics (one in operation and one standby) mounted one above the other. This type of optic had not been available at the time that the re-equip project was being planned. The new optics were brought into service on 26 April 1995.

The PRB21 optic was returned to the manufacturer who converted it to a PRB22 for installation at Mew Island as part of the automation of that station.

Following improvements to the buoyage provided by local lighthouse authorities in the vicinity, the turning light at Haulbowline Lighthouse was discontinued on 16 July 2008.

The fog signal was permanently disestablished on 8 January 2009.

On 1 July 2011 the range of the light was reduced to 10 nautical miles with the light being exhibited during hours of darkness only. The character remained the same at Fl (3) W 10s but the flash length was altered from 0.2 seconds to 0.5 seconds.