Fionn MacCumhaill (sometimes also known as Finn McCool) was the greatest leader of the Fianna, the ancient warrior band of old Ireland.

The name Fionn is taken from the Gaelic word that translates as ‘fair’ possibly referring to lightly colored hair. Fionn was the son of Cumhaill who was a leader of the ancient Fianna, a band of mercenary warriors who lived apart from the rest of Gaelic society.

The Fianna never owned lands and were famous for their generosity. They travelled every road of Ireland, visiting every place and knew the entrances to the Otherworld.

Fionn’s mother was Muirne, who was daughter to Tadg Mac Nuadat, a druid. Cumhaill had kidnapped Muirne when her father refused him permission to wed. Outlawed by the High King of the time, Conn of the Hundred Battles, the subsequent battle of Cnucha resulted in the demise of Cumhaill by Goll MacMorna, who assumed leadership of the Fianna.

The now pregnant Muirne was exiled and was placed under the care of Fiacal MacConchinn, Cumhaills brother-in-law. After bearing her child Muirne left him in the care of his new family and a warrior woman named Liath Luachra, who was responsible for teaching him the ways of war and the Fianna.

He was also tutored by Finnegas, the druid poet who had spent years searching for the ‘salmon of knowledge’, a mythical creature that could endow all of the knowledge of the world.

Eventually he caught the fish and instructed the young Fionn to cook it for him. While cooking the fish over the fire he scalded his thumb on the hot flesh and instinctively put the thumb to his mouth, instantly gaining the wisdom long sought after by Finnegas.

As an adult Fionn traveled to Tara, seat of the High Kings of Ireland. For 23 years the fairy Aillen razed the site to the ground every Samhain having first lulled its guards into slumber with her music. Fionn managed to defeat Aileen however, by keeping himself awake by piercing his own skin with the point of his spear, and lay awake all night by leaning on it thus.

His nobility was recognized and Goll MacMorna, who was still leader of the Fianna, stepped aside to allow Fionn assume his rightful place. Goll even gave Fionn his home at the Hill of Almu as recompense for the death of his father.

His most famous wife was Sadbh who had been turned into a deer by the druid Fer Doirich. While out hunting, the hounds of Fionn, Bran and Sceolang, recognized the deer as a once-human form, since they too had once been human.

Fionn did not kill the deer who was then immediately transformed into his beautiful wife. She bore him a son, Oisin, who later became one of the greatest of all of the Fianna. The druid Fer Doirich returned however and re-cast Sadbh as a deer who then vanished into the forest forever.

Later in his life the reigning High King, Cormac Mac Airt, promised Fionn the hand of his daughter Grainne. It was not to be however as Grainne and Diarmuid Ua Duibhne, another of the Fianna, eloped with Fionn in pursuit.

The matter was resolved when Fionn allowed the lovers to be together, only for him to take revenge in later life by not using his powers to heal Diarmuid and prevent his death, after he had been gored by a boar.

Fionn is credited with creating the Giants Causeway as stepping stones from the North of Ireland to Scotland. Another legend tells how he threw a large piece of the land into the sea at an enemy, that piece of land becoming the Isle of Man. The hole left behind by the clump of land he threw became Lough Neagh.

The death of Fionn MacCumhaill is shrouded in mystery. One legend suggests that he is not dead but merely sleeping in a cave under Dublin, ready to strike back against Ireland’s enemies. 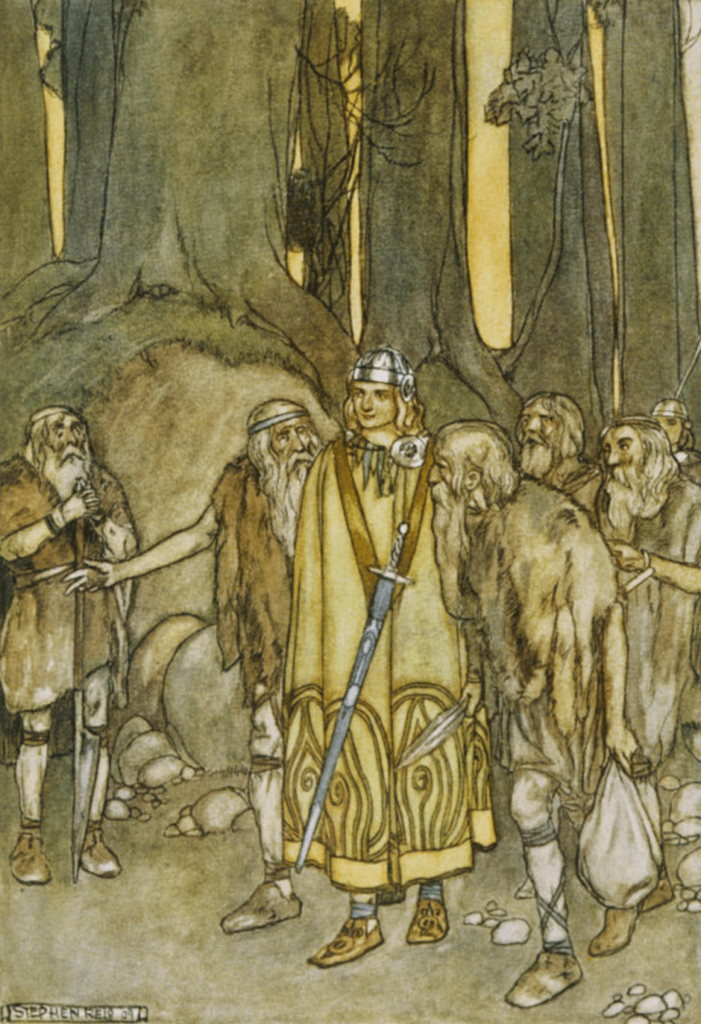