This map of the Cadger’s Pad from Omeath to Annaverna (and eventually Dundalk) dates from the 1850s. The heavy red lines are townland boundaries: Annaverna top left, Doolargy bottom left, Tullaghomeath on the right and a tiny bit of Corrakit at bottom right. At bottom left you can see a path marked ‘The Cadger’s Road’ and if you follow it carefully you can see that it crosses into Tullaghomeath at the centre (which is the mountain ridge) and then zigzags down the steep slopes to end at Tullagh Bridge (top right), at the sharp bend on the New Line about one kilometre below the Long Woman’s Grave. This was the route by which the herring girls of Omeath carried their fish to market 200 years ago, each with a creel on her back with two stone of herrings wrapped in seaweed. It was still an important route after the fish stocks disappeared in the late 19th century: within living memory an Omeath woman told folklore collectors that she “thought nothing of putting a bag of (live) hens on my back and heading over the Cadger’s Pad to the Fair Green in Dundalk”. The word cadger took on the meaning of begging in Victorian times but in its original meaning dating at least to the 14th century it meant pedlar or dealer. There are songs and recitations about the fish cadger around the Mournes and in West Donegal.

On the right is Ann Flynn, pictured in 1888 with a creel of fish on her back where the Cadger’s Pad emerges from the Annaverna Road at Ravensdale 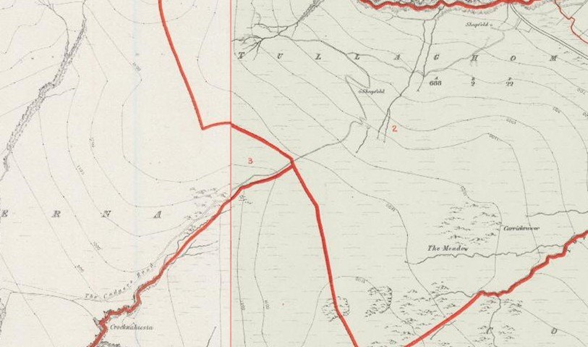 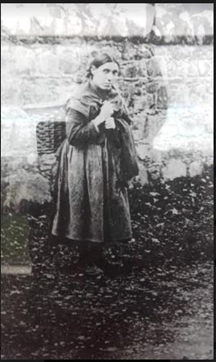